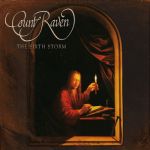 The Swedish Doom Metal institution COUNT RAVEN seems to take the slow tempo that’s typical for the genre all too serious. After four albums in only six years in the early days of their career, it took main man Dan “Fodde” Fondelius and his new allies twenty five years to release two more albums. And even though COUNT RAVEN were on hiatus for five years, this is more than a slow recording tempo. Thus it is no wonder that it took the Swedes twelve long years to record a follow up to 2009’s comeback album “Mammons War”. And it was really worth the wait. “The Sixth Storm” delivers everything COUNT RAVEN always stood for: massive, sometimes groovy Doom Metal with the peculiar vocals of Fodde who seems to pay a tribute to the mighty Ozzy. And of course we get finest song writing. Just listen to the incredibly grooving opener ‘Blood Pope’ with its ultra heavy break in the end in Funeral Doom style. Or to the fantastic old school Doom Metal masterpiece ‘The Curse’ and the dark ‘The Nephilims’. How about the spooky ‘The Ending’ with its catchy refrain? Or ‘The Giver And The Taker’ with its gruff hooks? And the epic Doom monolith ‘Baltic Storm’ with its BATHORY vibes is simply a class of its own. ‘Oden’ fits this one in terms of atmosphere, yet comes along even a little folkloristic. Of course we have a shorter lament about all the world and his wife with Fodde and his keyboards, which is called ‘Heaven’s Door’ on this album. And the final ‘Goodbye’ is a very unusual mix of a typical OZZY OSBOURNE piano ballad and a Folk Rock song, that’s an acquired taste but works in the long run. Overall, “The Sixth Storm” is one more outstanding COUNT RAVEN album that still shines in any household that loves Doom Metal. For more COUNT RAVEN info, please visit www.facebook.com/countravendoom, label contact: www.ihate.se