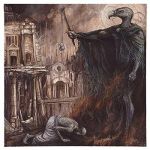 In the early history of Metal, bands from the UK were the driving force. Nearly all great Metal from the early 1980s was from the British Isles, the whole development of Metal would not have taken place without the originators of the scene. But since the mid of the decade, Metal from the UK fell behind and this didn’t change, asides from the early days of Death Metal. Just every now and then, good or unique British Metal bands came to light. Will CRAVEN IDOL from London change that? I fear not, even though their second album “The Shackles Of Mammon” is definitely not a bad one. But CRAVEN IDOL play the Black / Thrash card and this genre is a little too stale to really raise attention. The somehow strange moments in the sound of the band have a certain memorability on the one hand, but on the other make it not that easy for the listener. CRAVEN IDOL very often remind me of Swedish over-the-edge Thrashers CRANIUM, since they have a similar energy level like overexcited children in the playground. And the a little longer songs (compared to other acts from the genre) are not lacking compositional abilities. But in the long run, the riffs on “The Shackles Of Mammon” wear off a little bit. So, after the fine opener ‘Pyromancer’ with its MAIDENesque lead bass moments and the still cool ‘A Ripping Strike’, the tension sinks, despite some nice moments. It’s up to the final long and pretty epic ‘Tottering Cities Of Men’ to leave another little impact. But two and a half good songs sadly don’t make a good album, so I doubt that CRAVEN IDOL will really enrich my life. If they might enrich yours, visit www.facebook.com/pages/craven-idol/158945044134965 or www.darkdescentrecords.com