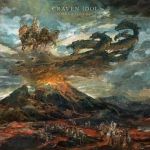 CRAVEN IDOL are a band from the UK and this is their third album since their formation in 2005. And it is an impressive delivery of Black Thrash Metal, rooted in the classic names of the past, but also incorporating later Black influences, with a modern production that in no way subtracts from the aggression of their sound. The band may be more refined than in their demo days (which included once recording a cover of the German POISON), and even the superb cover artwork reflects this (depicting the cosmic battle between Zeus and Typhon), but they still sound tough as nails and raw as hell. I feel sure their fanbase will extend from listeners of DESTRÖYER 666 to WATAIN to ABSU; together with all the hostility there is a lot of music; riffs, solos, good songs. Most often you’ll be hearing intense Black Speed, sometimes very fast such as in the title track, driven by frenzied drumming, sharp distorted guitars and a maniac voice singing about the Titanomachy. But there is also an underlying layer of Heavy Metal, which raises its head a little more prominently on occasion. The two final songs are longer (each one over 9 minutes long), and mainly ‘Deify The Stormgod’ is an epic exercise with occasional clean vocals and phenomenal speed which I found most striking, while ‘The Gods Have Left Us For Dead’ steers at times a bit more into the realm of more recent Black Metal. These final and audacious songs never sound repetitive due to the band’s inventiveness and talent, and even the sporadic moments of ambience and melody (like the beginning of the closing song) are sharp and penetrating. CRAVEN IDOL manage to capture Black Thrash in its most vicious and brutal way and still show their technical and songwriting ability, while leaving a personal mark in their creation. A very violent album, and a very good album! For you to headbang till you break your neck. Follow their trail at www.facebook.com/cravenidol, www.facebook.com/darkdescentrecords