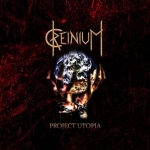 New, young and talented Metal bands seem to be popping up like mushrooms after a hard acid rain. This particular sextet known as CREINIUM, has only been around less than 2 years, and they have already released a couple of demos ("Modern World Tyranny" in 2013 as self-released) and now this 5-track EP called "Project Utopia", on the Finnish label Inverse Records, which will officially be released on April 16, 2014 (so hold your horses for a bit longer). It’s kinda hard to put CREINIUM’s stuff under one specific musical category really, but then again there’s not even an urgent need to categorize everything really. But some sort of melodic and partly symphonic Dark and Black Metal this certainly is, performed by tons of skills, yet utilizing different influences pretty nicely indeed. CREINIUM have obviously wanted to take their time before entering to record "Project Utopia". This EP, is actually all around a pretty impressive sounding release, as CREINIUM’s melodic and aggressive symbiosis of extreme Metal, comes out carefully crafted and not rushed a bit. Some DIMMU BORGIR-ism is present in CREINIUM’s sound in small portions but gladly there’s simply so much everything else going on within this very promising EP. A synth part in ‘New World Order’ reminds me of the kind of song arrangement that for example AMORPHIS would certainly use within their stuff without any hesitations. Some credits must also given out for the guys for the vocal arrangements, in which both death growls and Black Metal snarls are at times used in a very clever way, depending on which mood a song may take when progressing on. "Project Utopia" makes undoubtedly a great promise about the band’s future endeavors recording wise, no doubts. They made me hungry for more, that’s already certain. CREINIUM can be dug up from: www.creinium.net, label: www.inverse.fi