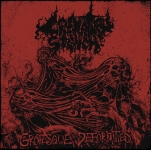 With a marvelously morbid band name like CREMATORY STENCH you immediately envision what their music sounds like. But does that morbid vision become a reality when listening to the music by these American newcomers? The answer is a resounding yes! As soon as the first festering notes of the opening track ‘Septic Offal’ burst out of the speakers like a stinking slowly oozing pus ridden musical abscess it is very clear that this is a band with their musical roots firmly rooted in the sound of old school of Death Metal. The early material of Death Metal pioneers AUTOPSY and "Scream Bloody Gore" era DEATH instantly comes to mind, the sound is raw and heavy and it dosen’t take long for a slow crawling deathly dirge to come out of the murky musical maelstrom. The riffs are simple and straight to the point, the drums primitively pound away, the vocals are grotesque and growled, the bass is bludgeoning, all mixing together in a muddy reverb drenched abrasive aural assault which is not polished or pretty in the slightest and which is crudely complimented by a production that savagely sledgehammers your speakers. CREMATORY STENCH have forsaken any of the aspects of modern Death Metal in favour of a crude back to basics approach. Fans of early AUTOPSY, GRAVE, NIHILIST, early DEATH, early MORGOTH, early ASPHYX etc will rejoice about the rotting musical misery on offer here. Dead Heavy, Dead Evil… Death Metal!! More info at: www.facebook.com/crematorystench, www.fda-records.com