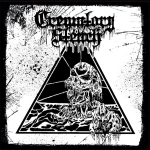 CREMATORY STENCH is a young and rather unknown band from the US, hailing from the region of Costa Mesa. Looking at the cover of this EP, you’ll probably get the impression that you’re not dealing with a melodic or progressive band. Bullseye! It’s raw old school Death Metal that’s unleashed upon you. After some seconds comparisons with the first records from SINISTER, BENEDICTION, CANNIBAL CORPSE and PESTILENCE came to mind. Everything sounds within human proportions. A lot of Death Metal at this moment seems to be inspired by DEMONCY or INCANTATION (nothing wrong with that!) but this EP makes you think of ASPHYX or DEATH. Especially the first one because of the vocals of J. Aguilar (also guitars) who shows some similarities with Martin van Drunen. The band further consists of E. Cruz – bass, E. Barajas – guitar, M. Valencia – drums. People who like GRUESOME should give this a try. The four tracks ’Desolate Grave’, ’Fermented Remains’, ’Lobotomy’ and ’Resurrection’ show some Thrash roots and tend to sound the same in the end. On one record this can be fatal, on the other this can be a positive element. On ”Crematory Stench” I’ll go for the second, while a bit more variation could do no harm. The production is excellent and old school, so this could easily be a forgotten EP from a quarter of a century ago, only recently discovered. Very fitting and promisong material for F.D.A. Records. For more info, go to www.facebook.com/crematorystench, www.fda-records.com