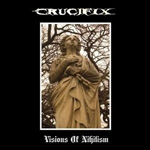 Championing the early 90s Death Metal sound, CRUCIFIX’s "Visions Of Nihilism" sounds like something you would have had on heavy rotation along with all your favorites from that period. Whether you were into OBITUARY, MORBID ANGEL or CANNIBAL CORPSE, CRUCIFIX would have found a place among them, perhaps even as part of your arsenal of self-tailored t-shirts cut to optimize maximum air flow and ventalation to your armpit zone. The sad truth is "Visions Of Nihilism" never even saw the light of day back in 1993. Instead, most of these songs were released in demos and singles reaching only the few and far between. The sound is rather classic for this period, but with notable distinction. The bass-heavy mix seems to favor the low end, which when combined with the genre’s technical arrangements, makes everything impossibily heavy like being stuck under six feet of dry dirt. This album is a relic, a calling card to the genre’s 90s era manifestation; they easily stand tall among their contemporaries except that most of us are hearing it way after the fact. There are many comparisons one can make to CANNIBAL CORPSE and these would be true, however they seemed to run parallel, they too were mastering this genre while seeking new depths and creating suffocattingly airtight arrangements. It is odd that they simply disappeared. Nonetheless, "Visions…" is a fascinating evolution of the band from a harder Thrash sound to pure Death Metal devastation. The main transition seems to have occured between 1991 and 1992. ‘The Beast Within’ and ‘Addiction’ sound very similar to earlier OBITUARY but minus that trademark upward inflection of the vocals. The two earlier tracks, chronologically, are even more thrashy and gruff than the previous; they serve as an interesting parallel to the later songs. These are more stripped down but the energy is exactly the same. The marked change in their sound makes itself boldy known with ‘Devious Conceptions’, which I happen to find the most punishing in this collection. It’s more technical, the vocals are more gutteral and the percussion is utterly relentless. Throw in some lightening quick guitar solos in to punctuate and there you have it. The brutality continues up through the band’s final releases in 1994. While the history of this band is a bit unclear, a lone interview with vocalist Robert Cortinas serves to be rather poignant. "[…] our new tape […] is all going to be Death / Grind. It’s sure to blow anything else you’ve heard of us away." (Diarrheader issue # 1, 1992). This pretty much sums it up, but the experience of listening to this collection nearly 20 years later makes the transition perhaps the most intruiging part of this album. It’s a lesson in the stylistic origins and evolution of Death Metal that is perhaps a bit more analytical than the players could have intended, but it makes it all the more fascinating. This one is an instant or rather "should-be" classic that should not be missed (again) by any Death Metal fan. www.facebook.com/crucifix.cortinas, www.darkblasphemiesrecords.com