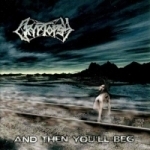 Alongside with KATAKLYSM Canada’s most extreme Death Metal act CRYPTOPSY is back with its fourth album consisting of nine eruptions of ultra fast, totally weird and technically sick Death Metal. Compared to their preceding releases this album is extremely hard to digest and I really don’t know what to think about this one?! On the one hand I’ve to admit that the members in CRYPTOPSY are one of the most skilled and original musicians around, especially the drumming is totally insane. On the other hand it’s almost impossible to listen to more than two or three tracks in a row, so “And Then You’ll Beg” simply gets on my nerves. Sad, but true! Sick stuff for sick minds.