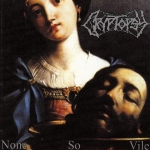 Even though Canada’s own CRYPTOPSY are around for ages, they never really were a top band of the Death Metal genre. And I have to admit, I never really took notice of their music as well. Heard one or another song, but nothing really caught my attention. Listening to their recently once again re-released second album “None So Vile” (originally from 1996), I understand that somehow. I’m just not the one who digs every technical Death Metal band. And CRYPTOPSY are very much on the technical side of Death, as well as they’re on the brutal side. After an intro from the third part of “The Exorcist” movies, ‘Crown Of Horns’ starts with a hyperspeed blast that reminded me of KATAKLYSM. As their fellow Canadians, CRYPTOPSY don’t keep up the pace or a riff for more than an estimated ten seconds, and spice their already extremely variable stuff with breaks and pieces of skill. Of course this style of playing is highly admirable, but I always tend to only see it from the sporty point of view and as a fantastic cognitive performance as well. The songs themselves are nothing less than nearly elusive to me, so none of the first six tracks on “None So Vile” really remained in memory. I even had huge difficulties in recognizing that another song already started… When ‘Phobophile’ started with a piano intro, I really was surprised that it already was the sixth song, not the third or fourth. In the end, the album finally presented its best songs with the rather short and hectic ‘Lichmistress’ and the final ‘Orgiastic Disembowelment’, that has some cool, Jazz inspired bass guitar breaks. Honestly, as much as I raise my hat to CRYPTOPSY for their abilities, I also shake my head and say “No!” to listening to the whole album again. Maybe the last two songs… Check out www.cryptopsy.ca or www.facebook.com/cryptopsymetal for more about the band and visit the label at: www.hammerheart.com