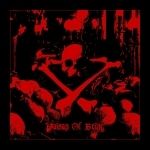 Dark Black / Death Metal with a doomy feel to it, is what is blasting from the speakers, when the album “Poison Of Being” from this Polish trio, is being played. The band was founded in 2017, and after a demo and a couple of EPs, they are now ready with their first full length album on Godz Ov War Productions. The atmosphere is bleak all the way through this album, at times darker and doomy, at other times, slightly chaotic with a War Metal vibe over the Black / Death Metal elements that drives the release. The riffing is at times droning and melancholic, to shift into a more furious and aggressive parts, and at times quite melancholic and filled with despair. The vocals are raw and a good fit to the darkness the album contains. I don’t always know how good the music nor songwriting is on this album, though the atmosphere is captivating and keeps my attention nailed on the music. Don’t know where the band is heading, as K.M. which seems like the mastermind behind this album, is no longer a part of the band. Only vocalist E is left, with a couple of new members though, and well, those vocals are a great thing about this release, and E has been a part of the band since the beginning, so he might know which path to take CULTUM INTERITUM. “Poison Of Being” is a decent blast of brutality and an atmosphere drenched in darkness, despair and intensity. This album will not go over in history, though the band might have a good future ahead of them, if they keep the dark flame intact! Find peace among the tombstones of Thulcandra: www.facebook.com/cultuminteritum, www.godzovwar.com