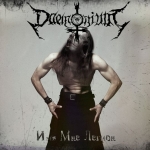 Debut album of this Ukranian Black Metal band, that for the first impression has a quite disturbing cover depicting the vocalist which has a weird looking waste… well, pass over the shocking cover art, a very macabre sounding intro precedes their songs of a somewhat symphonic style of Black Metal, not far away from early DIMMU BORGIR, with some parts that are nearer to older DISSECTION, and some others reminding of a more melodic MARDUK. Their symphonic part is not done by keyboards exactly, although the band uses some samples, but in fact it is the quite etherial guitar melodies they use. They usually play fast but the changes in tempo are done with class and are usually giving an epic edge to the more mid-tempo parts. All of the songs are growled in their native tongue, and in this case it does give it a quite personal touch to it. If someone remembers the first two albums by Norway’s COVENANT, well this one has a similar overall vibe. Also bit of newer SATYRICON can be found here. A quite interesting fact, two of their songs are also found at the end of the recording, in totally instrumental versions, but done in an ambient style, with no distortion nor drums, and they sound like an epic movie soundtrack. So fans of the aforementioned bands, can do no wrong with this release, which is by the way, very well executed, performed and recorded. www.facebook.com/pages/daemonium/317749851617632, www.bloodreddistribution.com