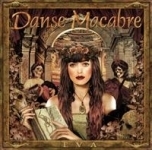 DANSE MACABRE is the brainchild of Gunther Theys of ANCIENT RITES fame, and dates back as far as 1995 when Gunther and members of SEPTIC FLESH and NECROMANTIA decided to form a goth outfit. Faithful readers of the printed version of VFTD may remember that in issue #9 published in 1996, Gunther described himself as a goth music fan, so one can say the man is very dedicated since here is the first DANSE MACABRE album finally, with a new line-up. I am not at all a fan of goth music, so I felt myself surprised to actually enjoy “Eva”. Every one of the four band members is very talented, the music is elegant, the production faultless and the artwork (conceived and painted by the DANSE MACABRE guitarist Jan Yrlund) absolutely ravishing. DANSE MACABRE (not one of the most original monikers I must say) include a lot of diverse influences in their music, I even found traces of RAMMSTEIN and DEPECHE MODE here and there. Gunther’s voice is one of the highlights of the album, he constantly changes his tone and tries new way of singing again and again, a convincing performance. I think the feminine voices you can find on “Eva” are superfluous, but hey, I suppose they are mandatory in this kind of music. Even if the guitar is predominant here, I can’t say “Eva” is that much Metal, so devotee of brutal stuff should stay away from this. My only complaint is that this sort of music sounds sometimes clinically cold, the heat of passion is missing somewhat. Only “Oblivion” with its Arabian sensuous atmosphere is a real standout track, the other ones sounding more or less the same. DANSE MACABRE see themselves as romantic (as the artwork and the lyrics are a claim for this), but they seem to forget that romanticism is a mix of diverse emotions, the cold gray of melancholy being next to the red fierceness of youthful enthusiasm. Well, I stop here before being totally boring. Investigate by yourself! Me, I can only recommend this album to Leif Jensen. (huh?! I guess when it comes to good ol’ Leifi you got something completely wrong Monsieur Vergriete, or is it your weird sense of humor I don’t get?! – confused Frank)