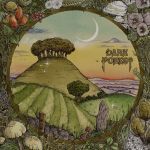 DARK FOREST from the UK formed in 2002 by guitarist Christian Horton. Establishing its name in the traditional Metal style, its Folk inspired sound also has a late 70s Proto Metal essence which sets them apart. In decades of activity, the band has released five albums to date, and celebrating the band’s twentieth anniversary, they have just released the five-song EP “Ridge & Furrow”, featuring four new songs, and a re-recorded track from their 2011 album “Dawn Of Infinity”. This EP doesn’t carry over any changes in their Folk tinged traditional Metal but it sparkles with grandiose guitar melodies that can transport you into a strange world. While it doesn’t have the broad scope of the full-lengths that they’ve released in the meantime, and even with a more contained runtime of twenty-six minutes, the band keeps hints of their ambitious flair in the five songs. DARK FOREST’s style, whether on ‘Skylark’, the title song, or the short, light and airy instrumental ‘Meadowland’, on the one hand exudes something calm and comforting, but on the other hand also an elemental Metal spirit that comes with energy and passion. ‘Under The Greenwood Tree’ highlights that speedy side with soaring guitar harmonies and engaging vocal hooks. Together with the artwork and lyrical ride on magic, adventure, folklore and ancient fantasy spirit, this EP reflects again on the DARK FOREST ode to nature and its eternal mystery. With all that, “Ridge & Furrow” offers all that’s essential to celebrate the band’s history and fans of DARK FOREST should find this enticing. Find out more about the band and label here: www.facebook.com/darkforestuk, www.facebook.com/cruzdelsurmusic