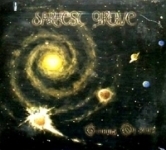 Very little info is available from this one man band of weird evil Black / Death Metal from the USA. This being their second release, has a weird cosmic and chaotic touch to it all, from the cover art, the title, to the way the music sounds. Even the band name is weird. I must mention the vocals that are an acquired taste, as they are obviously very pissed off, and at times might sound a bit out of the music, BUT this is the kind of album that needs more than one listen to really capture the essence, and once it is all in place, the whole picture reveals… as total chaos. DARKEST GROVE have without a doubt a strong influence taken from bands as diverse as BATHORY, BURZUM, VENOM, VOIVOD, MORBID ANGEL… but the one that reminds me most of all those mentioned is none other than THE CHASM, specially the sound and aura of “Deathcult From Eternity” which also has some of that cosmic relation to be found. The composition shines out as pure genius and the execution shows a lot of ideas that are able to be conjured in a great way. The presentation is also something to mention in the form of a digipak with the booklet lyrics attached to the digipak itself and many cosmic views that fulfills the essence of chaos the band expresses with their music. Although most of the time the band keeps it safe in an upper mid-tempo, the few bursts of speed are used within the right amount to enhance the music. This is one of those albums made to be discovered by listening to it a few times and discovering every time what a great album this is. More information at: www.myspace.com/darkestgrove, www.foreverplaguedrecords.com