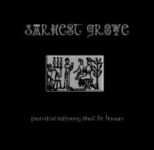 A one man Black Metal band from the USA. By the title of the songs, and somehow by the structure of the music itself, it can be easy to label his band in the “suicidal” Black Metal vein, although I would say that this not exactly the case. Yes, there is a depressive, almost suicidal edge to the music itself, as it also invokes grim images of melancholic Black Metal passages. Some early BURZUM can be mentioned although I find also some Death / Doom Metal overtones. For being a one man band, this sound a lot better than what is usually expected, and although I cannot really tell if the drums are done by a machine, it all sounds somehow “organic” thus giving it a deeper sound. Vocal wise there is probably more of a Death / Black metal voice. Sometimes the songs remind me to GEHENNA from Norway, from their “Second Spell” era. There are some few acoustic interludes in the songs to give an “epic” feeling here and there, and I also find interesting the fact that the guitar tone, although lower than what I would normally like, it is powerful enough to distant themselves from weak thin bedroom Black Metal sounds. I must also mention that this album was recorded back in 2006 and that a new one is expected in 2012. As it is, DARKEST GROVE is an interesting outfit, of well played and performed Black Metal, very reminiscent to the early Norwegian heroes, yet with far more finesse and deeper lyrics dealing with mankind and its decadence. www.myspace.com/darkestgrove, www.foreverplaguedrecords.com