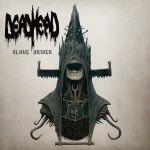 Damn, Holland’s DEAD HEAD are on their seventh album already and keeping it fast and vicious just like in the good old days. Apparently long time bassist / singer and co-founder Tom van Dijk has left the band for the third time, but was replaced by DEAD HEAD alumni Ralph de Boer (also in BODYFARM) who appeared on the “Depresion Tank” album back in 2009 and screaming as brutal and hateful as Tom, so the DEAD HEAD Death / Thrash machine is rolling on full speed. Yeah, “speed” is the name of the game on this beast of an album, starting with vicious, no thrills attack on the opening track ‘Acolyte’ and pretty much not letting down the tempo throughout the whole album. This band is delivering the prime material since 1989 with the core members still playing, so the maturity burns through and they fucking know what they’re doing. On tracks like ‘Grim Side Valley’, ‘Southfork’ or ‘Grooves Of Envy’ the band offers some respite from relentless speed, adding catchy hooks sliced with SLAYER inspired screaming solos, but overall this is a full on, fast Death / Thrash record through and through. The punchy and tight as fuck production perfectly supplements the intense and technical playing levels here, it liquifies the brain and drags you into non-stop headbanging. As for some criticism, it can be said that towards the end this whole madness of sick riffage and unrelenting speed may result in some fatique and becomes repetitive, although there is enough variation with some mid-paced parts thrown in and with a playing time of 45 minutes it doesn’t drag on. So to put it bluntly – no big surprises here, just a killer and fresh sounding Death / Thrash record by one of the most underrated masters of the genre! For all additional info check out: www.facebook.com/deadheadthrash, www.facebook.com/hammerheartrecords