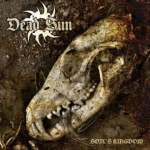 Congratulations to Mr. Rogga Johansson! “Soil’s Kingdom”, the second album of his long lasting project DEAD SUN, marks the 1000th record he’s involved in, at least approximately. To stay fair, DEAD SUN is a band Rogga started in 1996 when his first band TERMINAL GRIP broke up. After some demo releases, DEAD SUN went on hiatus, just to be revived every now and then by Rogga and some friends. The results of these reanimations are the album “The Clockwise Charade", released in 2013, and now this second album "Soil’s Kingdom”. Since I haven’t heard any older efforts of DEAD SUN, I am able to hear and judge the new album with virgin eyes, literally. And the verdict is not a real good one, at least for the first six tracks that were recorded especially for this release. These are songs that remind of a mix of mid to late 1990s Gothic Metal and melodic Death Metal of the Gothenburg school. If this sounds deterrent to you, you should better stop reading here, for DEAD SUN ain’t for you. But even if you are still reading, you need to be a real “Rogga-fanatic” to like the songs. The opening tune ‘The Sufferer’ might pass as a REVOLTING song that was left from a recording session. But with ‘Everfading Suns Never Die’, the grandeur is gone and the listener has to trudge through five pretty uninspired tunes that are neither fish nor fowl. Definitely some of the most boring stuff Rogga has recorded to date. But these six songs are not the whole stuff on “Soil’s Kingdom”. The final three tracks are taken from the demo “As Night Conquers Day” from 1997, remixed and slightly re-named for this release. Despite the still not too good sound quality, at least ’66Sick’ can be seen as the second highlight on the album, since this one is melodic and still pretty aggressive. But ‘Hell Inside’ and ‘Martyr’ are pretty uninspired tracks again, seems like I heard those guitar harmonies a thousand times before. So far, so bad. DEAD SUN maybe is one of the oldest bands of Rogga, but it seems to be the most neglectable either. More info can be found at: www.facebook.com/ibdc666