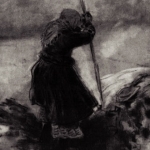 I was impressed with DEAKON’s demos so I looked forward to hearing this, one of two that DEAKON released this year. The first demo was a total Death / Black affair and remains my favorite. The second demo was great but also marked an early shift in direction. The gap between the first two was large and the gap between that demo and this EP is pretty big as well. There’s a demo from 2011 that I’m guessing is like a missing link but I have not heard it. More than half the first song ‘The Flood’ isn’t Death Metal. Instead it’s a doom-y REVEREND BIZARRE kind of thing that transitions to the speed and darkness of the previous demos then goes back to the doom stuff. The second song, ‘Estetika Satana Kriminale’ starts off with a more Scandinavian type of Death Metal but again contains substantial amounts of doom parts. Once more it’s the Death Metal to Doom and back again formula. A couple of “Come on, you ***!!!” from the vocalist by now is a little much but it’s cool to hear enthusiasm. The third and final song, ‘Monache’ is the most like the songs on the first demo. It’s heavy enough to be suffocating in some parts and shows the band once again using clean vocals. I think they’re just as well off without that vocal style but it does suit the abstract parts of their music very well and also helps evoke a psychologically disturbed and terrified vibe. I think the earlier demos are much better but this EP has a lot of strong points and would be perfect for listeners who enjoy different approaches to Death Metal. www.deakon666.com, www.assault-crew.net