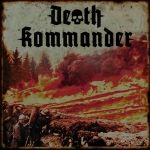 Edinburgh’s DEATH KOMMANDER sound like war. They sound like death. They sound like one million screaming soldiers dying in the trenches. And you know, judging by their band name, that’s most likely what they’re shooting for. “Pro Patria Mori” (meaning “Die for your country”) is about as clear as clear can get as to the album’s theme. It’s also their first album with only a demo from 2018 before it. Debut albums are there to capture years of energy and the band’s hunger to kick ass. Let’s see if they succeed. After the chugging guitars in the intro, ‘Tunes Of War’ immediately erupts into a frenzy of shivering guitars, stomping drums and vocal rasps from someone who sounds like he’s been smoking broken glass for most of his life. ‘Steel Reaper’ is mid-paced and smoky, like the burning embers of a war-torn city. And damn it if ‘Incoming Death’ doesn’t sound as if the Lord of the Dead weren’t chasing you to snatch your feeble soul away from you. DEATH KOMMANDER keep the album heavy and bleak throughout without a break from the destruction. ‘Shock Trooper’ bludgeons with its drums as ‘Mechanized Warfare’ regurgitates its putrid bowels onto the bloody battlefield. I swear the vocals made my throat hurt just listening to them. There’s a very consistent sound the band delivers, as ‘Unnamed Grave’, ‘Flander’s Blues’ and ‘The March’ indicate. There’s a throbbing, wilting bassline in ‘Flamethrower’ that just sounds fucking filthy. In all honesty, the entire album sounds fucking filthy. I felt like I needed to shower afterwards. If “Pro Patria Mori” is any indication of a band that doesn’t fuck around, then DEATH KOMMANDER should have a long career. This is Metal without all the movie samples, experimentation or any of that other crap some bands think is cool. Hail DEATH KOMMANDER. May your reign be dominant. More band info you will find at www.facebook.com/deathkommander, label contact: www.facebook.com/warhornrecords