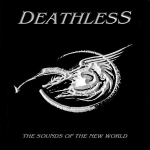 DEATHLESS
The Sounds Of The New World
(GS Productions)
53:38min

DEATHLESS from Spain released only one full-length ("Time To Be Immortal", 2000) and despite the band’s status is still listed as active on Encyclopaedia Metallum. The last release was an EP called "The Sounds of the New World" in the year 2003. Maybe this re-release heralds upcoming new recorded stuff, but the band’s homepage just shows the monicker and nothing more. So I guess GS Productions merely saw the chance to publish another re-release. This time the output features the mentioned EP and two different promo releases back from 1996. All songs were also published on the band’s debut, so by purchasing this CD you will get all songs ever written by DEATHLESS. At first time I was a bit sceptical, but the music is a nice throwback to the time when melodic Death Metal bands set value upon "Death" and "Metal" and, in purpose to make things less monotonous, added Thrash Metal influences to their style. The twelve tracks are well-crafted and should rejoice the heart of every melodic Death Metal fan. More info: www.deathless.eu, www.gsp-music.com