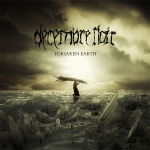 "Forsaken Earth" is the title of the second full-length album of German Doom / Death Metal hopefuls DECEMBRE NOIR and at the same time, the title builds the bridge to their debut release “A Discouraged Believer” as they had a track with the same title on it. The first track ‘In This Greenhouse Of Loneliness And Clouds’ starts where the band has stopped on their debut. Slow Doom / Death Metal with a slight touch of Gothic here and there, presented very melancholic and full of despair and sorrow but always with a note of light and hope in their music. The thick guitars heavily creep out of the speakers and immediately catch the mood of the listener. The grunts abound in grief, sorrow and despair and the drumming seems to push the listener over the edge, especially when the blast beats appear. The band still has a good feeling for the proper balance between slow and up-tempo parts and the level of hardness in their sound. Apart from classic Gothic Rock also 70s Rock in form of obvious PINK FLOYD influences appears in their sound and deliver the right level of diversity in their music. Stylewise the changes are marginal compared to their debut but their songwriting has grown a lot and sounds really matured now. The band seems to have achieved the ability to reproduce the ideas in their heads also on the songwriting- and performing-side. The overall picture is consistent and the band’s standard easily can compete with genre protagonists like OCTOBER TIDE or MY DYING BRIDE. The production again is clear and powerful with a harmonious balance of their ingredients. Rounded off with a really fine and well-fitting cover artwork, this release is recommended for all fans of the mentioned genre and the right medicine for this year’s rainy summer. More information at: www.decembre-noir.de, www.facebook.com/decembrenoir, www.fda-records.com