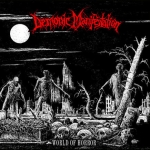 After a demo tape in 2013, the debut album from Mexico’s DEMONIC MANIFESTATION is out via Dan’s Crypt Records. They play a twisted brand of Death Metal influenced by the NWOSDM. After a first listen, I was instantly drawn to early 90s lesser known bands such as EXCRUCIATE, CONVULSE and GOREMENT. Even the overall production reeks of Sunlight Studios trademark sound. Nevertheless, there is an obscure atmosphere surrounding "World Of Horror" that kinda sets them apart from the ENTOMBED clones. It may be the Latin American "Factor X". I don’t know why, but even though the influences are obvious, I heard some traces of THE CHASM in certain passages. Production wise, everything is there. The creepy melodic lines, the buzzsaw heavy as fuck guitar tone courtesy of Martinez Fray and Victor Mercado, the pounding drums excellent performance by Felipe Gonzalez and Cesar Garcia’s thick bass tone rounding things up. This is a solid Death Metal album with good songs and catchy riffs. Great production, a balanced mix and convincing executions. Personally, I enjoyed it the first 2 or 3 spins, but then it started to sound similar to other bands out there. The band just started in 2012 and these guys are seasoned musicians that have played with other bands previously. So there is always a chance to improve and develop their own style. They just need to add some more variation and let other influences set in. I am actually looking forward to it. Contact the band here www.facebook.com/demonicmanifestation666 and their label here www.danscrypt.es