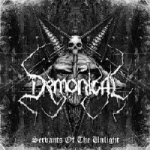 No wonder! As I am listening to this band and wondering how in the fuck I never heard of these guys before now? DEMONICAL was birthed just this past year 2006 by former CENTINEX members – Johan Jansson, Martin Schulman and Ronnie Bergerstahl, along with the added help from ex – REMASCULATE vocalist Ludwig Engellau. Raw heavy as all Hell Swedish Death Metal is the command of these sturmtroopers! DEMONICAL are better than CENTINEX ever were! Featuring 8 original blistering tracks and one cover song (that while fun to play, I personally would have deleted this to have had another original song or two included) professionally recorded at Black Lounge (Black Lodge?) and Nercomorbus Studios. “Servants Of The Unlight” just kills! Easily one of the finest pieces of brand new old style Death Metal, tinged with blackened inspirations, to be unearthed from Sweden in quite some time. And yes while Glen Benton might be scratching his head wondering if he should contact his lawyers about the album’s title for copyright infringement? Even he can not deny what a sick collection of songs are presented under this closely bloodied banner. The very first release of the German company called Cyclone Empire Records that I have had the privilege to check out. Keep it up! Contact: www.demonical.net or the label at: www.cyclone-empire.com.