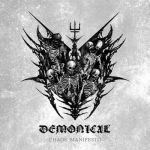 Sweden’s DEMONICAL return with their fifth full length release to date. DEMONICAL arose from the remains of formerly disbanded CENTINEX in 2006, and cemented the return with Swedish Death Metal in a far more impulsive and melodious manner. After nearly five years since the release of their last full-length album "Darkness Unbound" (2013), the Swedish merchants are now led by ominous death growler Alexander Högbom (OCTOBER TIDE, CENTINEX) and through this release they continued the traditional DEMONICAL path with ferocious HM-2 fuzz bomber driven Death Metal of sheer viciousness while keeping up their soul driven musicianship to persist exploring other dimensions. "Chaos Manifesto" was recorded back in 2017 and Karl Daniel Lidén (TERRA TENEBROSA, CULT OF LUNA, KATATONIA) was involved with the mixing and mastering. In association with Agonia Records, now it’s released on various formats in Europe and will be available in North America on April 27, 2018. The malicious album artwork was designed by Karmazid (URFAUST, WOLFBRIGADE, BLAZE OF PERDITION), which perfectly encapsulates the inner madness this release beholds. “Chaos Manifesto” features nine songs of old school Swedish Death Metal while also adding some soaring, forlorn and soul screeching melodic elements which transcends the atmosphere. Initiated with a darkness infested intro which falls into an violent turmoil opener ‘A Void Most Obscure’, you will be transported into the DISMEMBER territories and with the second coming ‘Towards Greater Gods’ you will find yourself praising and bowing the elder gods with mighty regards. A mid tempo progression with the imminent ‘Sung To Possess’, a creation that seems like a intermingling of DISMEMBER and MERCYFUL FATE aura and also touched the inner zones of AT THE GATES. ‘Välkommen Undergång’ appeared with an enticing groove where the choirs make the whole movement intensely powerful and captivating. Here, the spirit and shadows of the elder gods of Death Metal return to darken the sky like all devouring clouds mysteriously appeared above your surroundings out of nowhere and grasped yourself. An upsetting growl launches the fast and fierce ‘Torture Parade’ where lave flowing guitar melodies empowered by an excellent production are what you will be exposed unto ‘From Nothing’, like an everflowing stream of nothingness endured with a out of this world and primordial guitar solo. ‘Unfold Thy Darkness’ clearly brought up into this stream which reanimates the ENTOMBED spirit, a Death Metal creation follows the nefarious commands only. Melodies are still recognizable and unique while wandering into the deadly dimensions. Summoning and addictive transitions of ‘Death Unfaithful’ and an  inspiring intro percussive completes this record where HM2 driven riffing scourge, memorable and enthralling melodies and ageless ‘Swedish’ technique altogether makes this release a masquerade among countless other releases in close vein. With the solid and soulful musicianship of the nefarious artists behind DEMONICAL, creations like this always value beyond human words. In one of their interviews bassist Martin Schulman rightfully expressed: "Chaos Manifesto" features some new elements and streaks the band hasn’t explored before. We have tapped an award-winning Swedish producer and we are confident that the album – which summons bits and pieces from all our previous releases – will become an improved quality-related chapter for DEMONICAL, and push our Swedish Death Metal Darkness to a new level". Absolute truth and if you are a patient explorer and admirer of solid well executed Swedish Death Metal with the bands own writing ability, then get a copy of “Chaos Manifesto” and get intertwined again within the Swedish Death Metal multiverse. Check out the band here: www.facebook.com/demonicalofficial or visit their label: www.agoniarecords.com. A full album stream is available at: https://agoniarecords.bandcamp.com