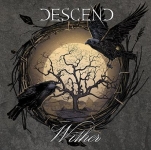 Whenever I am seeing this terminology ‘Progressive Melodic Death Metal’ used for describing some certain band’s music, sort of automatically it’s OPETH’s name that pops up out of the blue. Well, probably because OPETH have always done their proggy Death Metal thing so well within their stuff, pushing some certain musical boundaries further and further around them; so much even that the band is hailed as one of those pioneers of progressive Death Metal nowadays. When it comes to DESCEND, and their 2nd album titled "Wither", I cannot help myself comparing them to OPETH either, especially to some early times of OPETH. The musical connection between DESCEND and OPETH, is very apparent here but still DESCEND isn’t your 2-cent OPETH clone act by any means. DESCEND’s multi-layered, shamelessly unorthodox and progressive Death Metal is thoroughly displaying these fellows’ top-notch skills to write extremely demanding stuff, in which some heavy, Death Metal riffage has often been softened by some acoustic parts within the songs and beautiful soloing, allowing their songs breath more freely – and overall helping the songs just to flow more smoothly and effortlessly, kind of. DESCEND have done an amazing job on "Wither" indeed when it comes down to the guys’ hunger to write a complex, tricky and still very enjoyable material. At that, they have succeeded at surprisingly well, so predicting a pretty great future for DESCEND is actually somehow way easier than saying the Swedish hockey team will go for gold in the Olympics in 2014. ;o) More about DESCEND can be found right here: www.facebook.com/descendofficial, label: www.inverse.fi