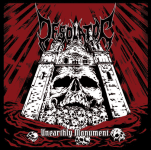 More old skull Death Metal attack, this time from Sweden. And for once they do not perform Metal of Death in the pure Swedish tradition. No. Instead they go for a sound that is more related to the old Dutch Death Metal scene, bands like PESTILENCE and ACROSTICHON come to mind, but also related to the brutal Death Metal scene from the USA circa early 90s with MORBID ANGEL and MONSTROSITY as references, and few touches that can be related to a very early EDGE OF SANITY. The production values are more of a very good produced demo rather than a full length album, yet somehow that also adds to the nostalgia factor. At times the way the band does compose riffs remind me the way VADER does, especially in a song like ‘Infernal Gathering’. As a whole, the album has a very coherent flow and essence, something that is quite rare in these days. If there is something I would change to make this even better is to have a fuller guitar and some more production values in the drums, but then again it is just me that cannot be pleased with an aural sacrifice until ears bleed. For a debut album, this is a very enjoyable piece of dead Metal, that can only conjure greater things to come in the future. www.desolator.info.se, www.facebook.com/desolatorswe, www.hellthrasher.com