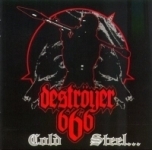 Australian’s most popular old school Death / Thrashers DESTROYER 666 strike back with their fourth full-length effort. It is their most consistent and fastest album so far, but it can not top its predecessor “Phoenix Rising”, because it lacks of a real stand-out track like ‘Lone Wolf Winter’ or ‘I Am The War God’ in my eyes. Although “Cold Steel…” offers some really great tracks, like their homage to SARCOFAGO ‘Sons Of Perdition’, the catchy and untypical ‘The Calling’ or traditional D666-stuff, like ‘Witch Hunter’ or ‘Raped’, I miss one of those epic songs, that I especially loved on their two previous releases (“Violence Is The Prince…” does not count, because it is crap!!!). Another thing I have to criticize on “Cold Steel…” is the production (done by Terje Refsnes at Sound Suite Studios, Marseille) that sounds very bass-less, it is quite clean and still powerful, but where’s the bass??? Overall I can recommend “Cold Steel For An Iron Age” as a good, but by far not perfect Death / Thrash album, which has some cool moments, especially because of K.K. Warslut’s awesome, grim and unique voice, but DESTROYER 666 have to work on themselves to create a classic someday. They have the potential and have shown that in the past, but the raw force they are able to deliver live has not been adequately captured on CD.