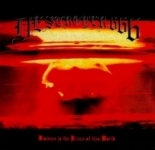 DESTROYER 666
Violence Is The Prince Of This World
(Modern Invasion Music)
48:30min

This re-release of DESTROYER’s first album for Modern Invasion Records has been timed rather well considering the most positive plaudits heaped upon their current and third album “Phoenix Rising”. And Modern Invasion are sure as hell going to make the most of it. Thankfully they have made it even more worthwhile by adding six tracks on to the original, in the shape of remixes and demo recordings from the time. Enough for any DESTROYER addict alone. However if you have just started your Antipodean journey with DESTROYER 666 with “Phoenix Rising” then “Violence Is The Prince Of This World” may come as something of a shock, owing far more to the more typical chaotic Aussie sound then the more slick and professionally melodic DESTROYER 666 of now. Meaning that “Violence Is The Prince Of This World” has more in common with SADISTIK EXEKUTION or BESTIAL WARLUST then anything else. It crashes and bashes and seethes in the typical Aussie way that could be called musically naive to many, but endearing to others. And I can see this being a worthy addition to many collections of Aussie chaos lovers around the globe. Yet for me, I reviewed this album when it came out and was less then complimentary to it and my opinion still stands… the production is weak and thin, the performance barely credible and the songs not even remotely up to the standards of today’s DESTROYER 666. Yet there are those of us who have a soft spot for Aussie bands, who will claim I am missing the point and chances are that these people consider this and the second album “Unchain The Wolves” as the definitive DESTROYER 666, claiming they are now too polished and controlled. Personally I am unconcerned with the “more underground than thou” points scoring system and while I can see “Violence’s” place within DESTROYER’s underground evolution I do now, as I did then, find “Violence Is The Prince Of This World” simply not a very good album.