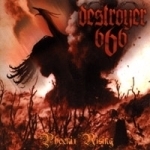 Over one year since its recording, “Phoenix Rising” finally sees the light of day! Those of you who were besotted with the mighty “Unchain The Wolves” album may have a few lumps in your throats’ when you initially pick this one up. Boasting an incredibly slick and polished production, “Phoenix Rising” is a more mature and well thought out affair than its predecessor. The classic DESTROYER elements are still there in full force, expounding their praise of the classic 80s era of Metal without ever parodying it. Trying to say that DESTROYER have become commercial is completely unfair as it still thrashes and rages like a beast, yet there is something more “friendly” to the ear that the more bestial storms of mutilation witnessed on previous DESTROYER releases. Opener ‘Rise Of The Predator’ hits like a sledgehammer as soon as the macabre intro ends, blasting its way through to ‘The Last Revelation’ and the title track before leading to what is undoubtedly THE best song on the album, ‘I Am The War God (Ode To The Battle Slain)’. This song is monstrous! Complete with a hypnotic melody throughout wrapped up with some excellent Black / Death Metal riffs. This song can easily be compiled with the “all time classic Metal songs” (at least in my humble opinion). For the rest of the album, that black thrashing mania, swept with some excellent melodies is the fare. Second best song on the record is the very catchy ‘Lone Wolf Winter’ with the classic line “I think I’m a wolf – then again I’m fuckin’ crazy”! You gotta love it. One of 2000’s best releases in my opinion and one that all self respecting Black and Death Metal fans should have in their collections. Rumors of a European tour are circulating and hopefully these will prove to be true. Next album “Cold Steel” has a lot to live up to. Let’s hope the standard they have raised with this one will continue.