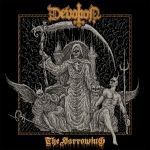 Bulldozing heavy Death Metal is what these Spaniards deliver and they deliver it with a hefty punch, complete with weighty fat riffs and bellowing deep death growls. Their sound is definitely rooted in the old school / early 90s Death Metal sound, with definite nods to bands such as BOLT THROWER, ASPHYX, DEMIGOD, early SAMAEL, early NOCTURNUS, etc, with a good mix of tempos throughout. From more uptempo sections, which are propelled by double kick drums and malevolently meaty riffs, but they do slow things down every now and again to a mid paced crushing crunch or inject some doomier passages, where they also add keys, which gives those parts a very darkly atmospheric sound and sound grotesquely grandiose in places. There’s a definite air of sinister gloom that permeates through the duration of this album, with the keys parts eerily penetrating through the impressively weighty and big production, which has a lot of depth to it and is rather clean and sharp sounding, without sounding over produced. DEVOTION have achieved an excellent balance with the sound, which is precise, but punishing and powerful in equal measure. Interludes are spaced between some songs, which add to the overall feeling of dread and doom that DEVOTION conjure up with their eerie Death Metal darkness. The guitar tone is as sharp as a freshly sharpened scythe and the leads pierce through the malevolent musical murk with a certain finesse and finely tuned precision, cleaner guitars are also used in parts to enhance the aural atmosphere even more. All in all a very impressive deadly dynamic sophomore album, which is cloaked in a sinister shroud of blackness and should end up in plenty of end of year lists. DEVOTION will appeal to those out there, who are devoted to the darkest of Death Metal that lurks in the shadows of the underground scene. www.facebook.com/deathmetaldevotion, www.facebook.com/memento.mori.label