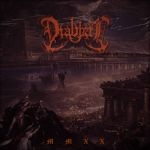 The New York based DIABHAL are a really new band on the scene, formed in 2019. This full length album “M M X X“ is their first sign of life and was originally intended to be a four track demo, yet it became a full album during the process of formation. Completely recorded in the home studio of singer and guitar player Tameem Shaker, “M M X X” was first available digitally on an independent basis before Iron, Blood And Death Corporation released it physically. Musically, DIABHAL follow the path of the old school of New York area Death Metal and underline it by doing a fitting cover of the old BAPHOMET tune ‘The Suffering’. So we get really old fashioned brutal Death Metal with some forays into the realms of Goregrind and doomier Death Metal. And DIABHAL go ahead with their songs with neither compromise nor mercy. The opening riff massacre ‘Vermin Plague’ shows the path DIABHAL walk on “M M X X”. And songs like the very variable ‘Crawl’ or ‘Famine’ are really a blood feast for all aficionados of raw and bloody Death Metal. But for me there is a fly in the ointment, because the guitars are often too faint in the mix. Thus “M M X X” is not as vigorous as it could have been. But nevertheless DIABHAL are a promise for the future. So visit them at www.facebook.com/diabhal or check the label responsible: www.facebook.com/ibdc666