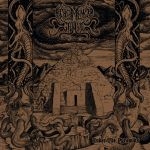 DIG ME NO GRAVE
Under The Pyramids
(Iron, Blood And Death Corporation)
37:21min

One look at the Russian band DIG ME NO GRAVE’s new album cover, is enough to guess what’s awaiting inside: old school Death Metal with horrid atmosphere. Take a look at that cover! It’s an immediate invitation to read “Imprisoned With The Pharaohs”- the shivering short story by H. P. Lovecraft and Harry Houdini and listen together. As soon as I checked all of the tracks of “Under The Pyramids”, they grow… in each listen with its own pace, without any enforcement. That says it all – solid Death Metal songs crafted here, that doesn’t want to be anything else. No farce. Absolutely, no complicated parts. Just murky, dead-limb-heavy and relatively simple old school Death Metal. The mid-tempo of “Slowly We Rot” and the atmosphere of “From Beyond” blends together and delivered in DIG ME NO GRAVE signatures and variative play. Listen to ‘From Beyond’, ‘When Old Gods Awake’ and ‘Grotesque Dwellers’ to experience the sadistic journey, that those blessed under-the-pyramid dwellers would undergo, upon the descent. I have to mention Aleksey Rumyantsev’s vocals. Nowhere near cliché. His vocal cords are rotten; his throat is putrid. The analogue sounding production nods to the atmosphere this is heavy and coarse. The drumming is pure controlled demolition that ought to be for ancient Death Metal. The engrossing and gripping atmosphere of Russian landscape, must have added its own forsaken mood throughout the whole record. The Russians are surely growing with one after another violent ecstatic creations and this third full-length will further strengthen their journey to unfathomable and incomprehensible multiverse of Howard Philips Lovecraft. To experience this – Iron, Blood and Death Corporation now released this worldwide on limited edition CD and digital platforms. To know more about the band and label, visit www.facebook.com/digmenograveband, www.facebook.com/ibdc666.