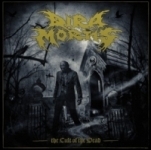 DIRA MORTIS
The Cult Of The Dead
(Defense Records)
20:02min

Another lethal slap of total brutal old school Death Metal! "The Cult Of The Dead" is the predecessor of the highly recommended "Euphoric Convulsions" album. This EP, released in 2011 by the Polish underground label Defense Records, proves once more that this four piece from Gorlice knows exactly how to create absolute brillant stuff. They use only the best ingredients for their own brand of ancient rotten Death Metal. Morbid mid paced sections, total insane raging speed eruptions, crushing riffs without end and superb growls are some of the basic elements on "The Cult Of The Dead". The guitar sound is dense and heavy as fuck… down tuned axes without mercy. The production is top notch if you ask me. It can’t compliment the songs any better. This release features a total of five tracks: one eerie intro, which prepares you for the upcoming storm, three own compositions and one killer AUTOPSY cover (‘Ridden With Disease’). If you call yourself a Death Metal maniac then do yourself a favour and don’t hesitate to get this EP and the other releases by this killer (still underrated) band. It’s really strange why this outfit isn’t more well know in the underground. It’s up to you to change this state immediately. For orders or inquiries please get in touch with the label at www.defensemerch.com.