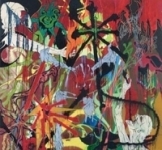 Norway may never be widely known for its Death Metal thanks to the unintended commerciality of certain acts committed by certain individuals in the 1990s, of whom, I’m sure, we are all aware. However, Norwegian Death Metal, and by extension a wider variety of Norwegian Metal, has gradually built a name for itself in recent years with bands such as OBLITERATION and AEON. Further contributing to the Scandinavian country’s historically small Death Metal scene is DISKORD, who began in 1999 and have ever since put out a new recording every two or so years. Their latest offering, “Dystopics” is their second full length album. For those of you unacquainted with more, for lack of a better description, off-key, or atypical, styles from bands such as DEMILICH, MOLESTED and VOIVOD, be forewarned: this album might take some time getting used to. On the other hand, there are tracks such as the opener, ‘Entropic Death’, that behave in more traditional patterns, barreling away, slowing down and again speeding up into catchy, yet atonal and bizarre riffs. I think it’s fair to say the requisite influences are at work here, chiefly AUTOPSY. But, as I mentioned earlier, there’s a high level of abstraction here, almost like VOIVOD or ATHEIST – not in sound or style, but in approach; the direction in which they’ve set their course. The result is quite interesting, a curiously fitting partnership of morbidity and mystic scientific otherworldliness. Upon listening, two things may happen: either you will love it or you will disdain it as yet another misbegotten attempt at forcing metal into “progressing.” I happen to like it and I hope you will too. More info at www.diskord.net, www.facebook.com/DiskordNorway, www.noposersplease.com