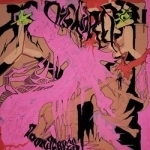 This is a re-release of their debut "Doomscapes" from 2005 on Edgerunner Music, of which a review done by collegue Thomas Ehrmann can be found on one of these pages. He mentioned it was great, but pretty uncommon Death Metal. I can only agree with this. Imagine a musical spectrum in which the manic of old VOIVOD, the rawness of maybe CELTIC FROST or AUTOPSY, the weird sometimes jazzy melodies of DISHARMONIC ORCHESTRA or CARBONIZED, the progessive character of GORGUTS and the epicness of THE CHASM manifest on your unsuspecting ears. Eventhough it’s not particular catchy and as weird as it is genius, some parts are pretty great and amusing enough to not get demotivated to continue spinning this double CD album. The production is raw, therefore the connection with AUTOPSY kept sticking. The Polish Hellthrasher Productions is courageous enough to re-release "Doomscapes" and beside this 45 minute trip you’ll get a re-release of the 2003 demo "Aural Abjection" as well. The ten tracks on this half an hour release differ not too much from the material on "Doomscapes". The production here is rawer and reminded of CONTEMPT’s "The Secret Around Us". Pretty cool stuff and definitely worth your attention. For more info check www.diskord.net, www.facebook.com/pages/diskord/6342268411, www.hellthrasher.com.