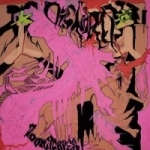 This is already an older release from 2005 but the band asked me to write a review about it. I hope this CD is still representative for the music the band’s playing these days. Hans from DISKORD told me that they are recording their 2nd album middle of August to middle of September 2010 – so the recording should be finished now. “Doomscapes” is the first full-length album from those Norwegian Deathers and it’s a hard one, not catchy at all and a challenge to write a review about it. Honestly spoken I’m not that sure if I’m too early with writing that review as this album grows with each run. At the first listen you have just one impression in your mind: Weird, fuckin’ weird. If you consider Death Metal to sound like AUTOPSY, OBITUARY, MORBID ANGEL or ENTOMBED then you won’t consider DISKORD’s music as Death Metal, nevertheless I hope that the genre-police won’t be too ignorant to blame those hopefuls. But how to describe these Deathers? As I said, “weird” is the keyword and I have three elements which are very dominant here. First up it’s VOIVOD for their unusual structures. 2nd element to mention is the completely underrated combo DISHARMONIC ORCHESTRA. Where VOIVOD have at least, despite little (too less!!) success, a huge respect inside the scene, DISHARMONIC ORCHESTRA never got the attention they deserved. Perhaps it was because of their label, their origin or just the weirdness in their music which was a bit too much for those days! Not only the music, DISKORD’s titles have a certain DISHARMONIC ORCHESTRA influence in it, too. Take for instance ‘An Architectonic Manifestation Of Death’, ‘Absurreality’ or ‘The Ubiquitous Transience’. And the last one to mention are AUTOPSY, the magnificent rawness shines through now and then and suits them well. Nevertheless I need to add another band which comes to my mind: RED HARVEST, especially the opener ‘An Architectonic Manifestation Of Death’ reminds me to them. But despite all those comparisons, the most evident fact is that these 3 guys in DISKORD enjoy what they are doing. It’s fun to listen to their songs and you can hear each second that they love to play the music the way they do it and that makes them as cool as they are. Putting a didgeridoo in a Death Metal tune (‘Reptilian Ancestry’) might not be outstanding, groundbreaking or plain special anymore – in case of DISKORD it fits just perfect. At the end it’s great Death Metal you get offered here. Great and not the common type of it, though it requests your time, patience and openness. And it’s Norwegian Death Metal. What is Norwegian Death Metal? Is there a significant element to say “this is Norwegian Death Metal”? Is it “Soulside Journey”? Only “Soulside Journey”? Well, not only, nevertheless forget the early nineties and talk about ~20 years later. What do we have? Black Metal – popular, yes, but Death Metal? Underground? UNSPOKEN are a fairly good band with good outputs so far. Who else? Perhaps I’m the wrong one to answer this question as I hardly know any current Norwegian underground Death Metal band and I know this might be my problem / mistake. DISKORD are now one band worth to be mentioned and mentioned as an outstanding, well, innovative Norwegian Death Metal band. “Doomscapes” is a perfect example of innovative Death Metal and besides that, perfectly but, you won’t believe it (haha), untypically layouted for a Death Metal album. Check this album out if you are open-minded enough. Take a look at www.noposersplease.com who carry this CD. This mailoder / label is run by Hans Jorgen Ersvik who handles the drums and vocals in DISKORD. Bandcontact through www.myspace.com/diskordnorway.