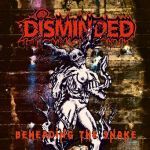 DISMINDED… Is that a real word? No idea. Oh well… The German band’s second album “Beheading The Snake” follows 2015’s debut “Out Of The Ashes” with a gentle roar. It doesn’t burst out of its skin in a rabid rage. It doesn’t smash through a brick wall like a rampaging behemoth. It doesn’t grab you by the throat and rip out your larynx. But it does casually slink into the room and make its appearance known. The opener ‘Beheading The Snake’ introduces a well-produced Death / Thrash album that is a little conventional in its delivery but not bad either. The guitars slither and chug, the drums throttle and the vocals are a mix of banshee wails and diaphragm-induced monstrous growls. ‘Disminded’ (there’s that damn word again), after about 45 seconds in, kicks into high gear as it lifts our feeble bodies in the air and rattles our bones. ‘Overdose’ is more thrashy as ‘Brave New World’ is a lumbering Herculean beast. Vocalist Kevin Lissowski, in ‘The Way I Hate’, throws out a few guttural vocals that would make any cricket happy. Kevin shows his array of weapons through his vocal cords in numerous ways throughout the album. ‘I Am You’ begins with a piercing scream that could shatter glass. The track evolves into a solid piece of furious Metal that’ll make the moshers stomp and pummel with exaggerated glee. The album continues with a few more satisfying songs including ‘Parasite Inside’, Carved In Stone’ and ‘Final Cut’. And then there’s the final song ‘Acid’… hoo-boy… uhhh. My first comment is… Why? The vocal-style reminds me of a pig fighting its way through a battalion of sea otters. Definitely a ‘what the fuck’ moment. Yeah, let’s end a fairly good album with something that makes its listeners want to regurgitate a horde of legless centipedes. Regardless, the good thing is that you can listen to the album until the last track, then turn that shit off. “Beheading The Snake” won’t break any records for originality or kick-assery (that’s probably not a word either). But it’s rather enjoyable in parts and maybe worth giving a listen. For more info, check out www.facebook.com/dismindedofficial, www.stf-records.de