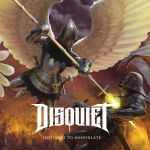 I must say that I had never heard of the Dutch Thrash Metal band DISQUIET. So, in the beginning I was anticipating some cut-throat brutal and thrashy songs in the vein of DEAD HEAD or THANATOS. But the troops of Sean Maia on vocals, Fabian Verweij and Menno Ruijzendaal on guitars, Frank van Boven on bass, and Arthur Stam on drums, play Bay Area Thrash with vastly melodic hooks. “Instigate To Annihilate” is already the group’s third album, after “Scars Of Undying Grief” (2011) and “The Condemnation” from 2016. In the growing discography, DISQUIET’s third full-length also delivers their Thrash Metal version with ample melodicism, but at times also leaves assaults, as ‘Designed To Violate’ opens with a melodic riff and then turns into a fast track. Vocalist Sean Maia can go on different grounds with his voice and can be both brutal and melodic, as can be heard in the opener ‘Rise Of The Sycophants’ or ‘Designed To Violate’. The variety on this album is further expanded by the inclusion of three esteemed guests. There’s a guest solo from Damir Eskic (DESTRUCTION) on ‘Demonic Firenado’ and ‘Wrecked’ has a prominent role by Vicky Psarakis, the singer of THE AGONIST. Charlotte Wessels (ex – DELAIN) role as the lead singer does the same on the closing track ‘The Final Trumpet’, and should claim attention with a well-executed end. IRON MAIDEN style percussion and twin guitar parts by string players Menno and Fabian give this track an epic character. Bassist Frank van Boven and drummer Arthur Stam did their job with steady hands, though due to the modern production Frank’s bass line got little from the mix. Still, songs like ‘Demonic Firenado’, ‘Rise Of The Sycophants’, ‘Sicario’ or ‘Destroyance’, where the mixture of Thrash Metal and surprising elements of Death Metal comes with solos and hooky riffs, can call for your attention for quite some time. The lyrics will also give a more thorough view of the band on the perpetual circle of hypocrisy, suffering and hatred instigated by humanity (as the lyrics of ‘No Moral Dignity’, ‘Wrecked’ or ‘Designed To Violate’ finely reveal) and certainly, the disc cover art made by Wouter Florusse echoes ideally. “Instigate To Annihilate” was released worldwide via Soulseller Records and you can surely give them some spins to reflect. More about the band at www.facebook.com/disquietofficial, label contact: www.facebook.com/soulsellerrecords