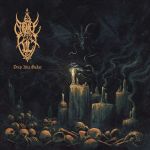 On their third album DJEVELKULT are doing what they do best and have already practiced on the two previous ones. That is, little surprising if you take a look at the band photo, pure Black Metal. Since Black Metal offers a huge variety of different sub-genres a bit more precised specification is necessary. The band describes themselves on their Facebook page this way: “Norwegian Black Metal band; a cult of darkness, chaos and blasphemy against man and God.“ A pretty fitting definition in my eyes. What I personally like best is the approach to songwriting under the motto “Brevity is the short of the wit”. DJEVELKULT are getting straight to the point, short and snappy. During the eight songs in 34 minutes the quartet from Norway unfolds an immense aggressive atmosphere. And even more, they manage to set some highlights. For example the slow starting ‘I Kuldens Vold’ or the clean vocals in the track ‘Fordømmelse’. Additionally some Death Metal riffing is intermingled here and there, making me think of bands like BELPHEGOR. Since this album was released in May this year there are already other reviews and some say “solid, but unspectacular”. Well I do not agree, for me “Drep Alle Guder” is an excellent Black Metal album within the boundaries of what can be called traditional or orthodox second wave Black Metal. Of course, anyone who expects something avant-garde or development is in the wrong place and can please listen to something else. Friends of the bands, who already liked the predecessors, can safely grab this album. And all other Black Metal fans should also take a listen, because “Drep Alle Guder” is definitely more than a stopgap while waiting for a new MARDUK album. More information can be found by visiting www.facebook.com/djevelkult or www.facebook.com/soulsellerrecords