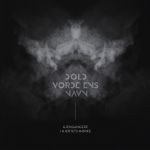 When the news circulated that Soulseller Records announced the signing of DOLD VORDE ENS NAVN and that their debut EP "Gjengangere I Hjertets Mørke" is scheduled for release and will unleash 20 minutes of pure northern magic, it was enough to take a deep dive into this release. Seeing that this new breed from Oslo congregated – on guitars, Håvard Jørgensen, the gentleman who co-wrote ULVER’s "Bergtatt" and "Nattens Madrigal", on vocals, Vicotnik of DØDHEIMSGARD and VED BUENS ENDE, on bass Cerberus (ex – DØDHEIMSGARD) and Myrvoll of NIDINGR on drums, some enchanting and shivering Norwegian Black Metal was simply a natural expectation. Initially with the release of a new song entitled ‘Vitnesbyrd’, established the anticipation. And, finally after being exposed to all four tracks of this mini album, the hunger of pure breed Black Metal was established right with the sound of the first note. Haavard’s riffing cuts razor-sharp through the air, while Vicotnik produces goose bumps one after the other with his massive organ. ‘The Ensomme Død’, translating probably "The Lonely Death", sounded totally ruthless conjugation of Black Metal and Punk’n’Roll. DOLD VORDE ENS HAVN does not stop there, because with ‘Drukkenskapens Kirkegård’, bearing a weird meaning of "The Drunkenness Cemetery" turned massive with blast beats and speed forward in the direction of the avantgarde, here specially the clean vocals are just wonderfully bizarre and possessive. Drummer, Øyvind Myrvoll, always has the perfect sense of when a piece can handle how much drumming. There are plenty of other transitions and moments will shoot the stars out of eyes; like the riffing of ‘Vitnesbyrd’, translated as "Testimonies", just makes you feel enlightened with its movement and transitions, because here the band revives the sonic essence of this time effortlessly and the trademarks sound as authentic as rarely in these days. And, finally, ended with ‘Blodets Hvisken’ (probably "The Whisper Of Blood"), which definitely honored the melancholic essence and primeval beauty of Black Metal from the 90s – and it’s so deeply engrossing that passionate followers of this genre will smile with ecstasy. Then, after twenty minutes, unfortunately, it’s over, but that’s just twenty minutes that you can and must hear over and over again, and praise subconsciously that the old hands are still good at it. In the unity of songwriting and performance, all four pieces work perfectly, adding effortlessly to a primal, yet sophisticated, Black Metal sound that can no longer be created by many bands in current days. Without any doubt, "Gjengangere I Hjertets Mørke" is going to be regarded as one of the most innovative Black Metal releases of this direction where enthusiasm meets intensity and from start to finish manages to burn like frostbite, which will surely make you await with nail biting anticipation for their upcoming creations. Explore more about the band at www.facebook.com/doldvorde and visit their label page www.soulsellerrecords.com