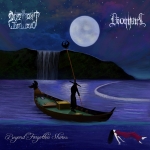 In times like these, bands from once exotic countries (in terms of Metal) more and more become the norm. Thanks to the internet and more or less well researched features in great print magazines, it has become a kind of common knowledge to know that the home of Metal is the world as such. So I am not that astonished to present a split effort of two bands from Pakistan and India here. The political dimensions of this release are more interesting to me, since both countries are involved in a quarrel about the Kashmir area that’s running since decades. But this is a review on music, so let’s start with the musical dimensions of “Beyond Forgotten Shores”. The CD starts off with three songs from DORMANT INFERNO from Mumbai in India. This (still incomplete) three piece gave me a flashback into a time when especially British bands introduced well tempered keyboard sounds to Death and Doom Metal. Yet, DORMANT INFERNO are playing their slightly Gothic Doom / Death with a passion, mixing the stylistics of albums like “The Angel And The Dark River”, “The Crestfallen”, “Turn Loose The Swans” and “Mandylion”. Which to me is fine, for all these records are classics, both for the genre and for me personally. In addition, we find a hint on the old school of US Doom / Death in the sound of DORMANT INFERNO as well, not just in the vocals. These references culminate in a very tasty cover of the INCANTATION tune ‘A Once Holy Throne’, played the DORMANT INFERNO way. So the Indian contribution to the split effort is already a very good one, but Pakistan’s part is either interesting. DIONYSUS are from the town of Lahore in Punjab, and their music is pretty unique, since they blend various sub genres of Metal into a floating, progressive sound that surprises pretty much. Death meets Black on a foundation of Doom and Prog structures, with some calmer moments to settle down. A sound like the one DIONYSUS created here might have fitted in the mid 1990s as well, when Death Metal bands and musicians tried to widen the horizons of the genre. The first song ‘Beneath The Skies Of War’ is a good example for this, a musical roller coaster ride at its finest. The other DIONYSUS song ‘Rain’ hints on DISSECTION as well as a little Thrash Metal influence and even some Prog Rock. So, this split CD features two promising new bands that hopefully will raise some dust in today’s Metal scene. “Beyond Forgotten Shores” is available in a limited edition with a second disc (the running time refers to this edition) featuring the EPs both bands released on a very independent basis a few years ago. DORMANT INFERNO unleashed “In Sanity” in 2011, up to now only as download, so the three songs are available for the first time on a physical medium. In their earlier days, the sound of the band was not that much evolved and reminded of very early MY DYING BRIDE, when the Brits released their first efforts. Despite the fact that these songs come along raw and a little bit unfinished, they still have their own special charming moments. The aspect of being unfinished goes a little bit for the older songs of DIONYSUS as well. Their first EP from 2012 was baptised “A Hymn To The Dying” and saw the light of day already in various CD and tape versions. The four long songs (plus one intro) showed a band with ideas and a passion, yet they were still on the way to find themselves. Mostly, I feel reminded of the early days of the Gothenburg Melodic Death scene, when the influence of early Black Metal was still audible in that sound. But towards the end, I taste some earlier OPETH as well, especially in the final ‘Angels Of Heaving Light’. But “A Hymn To The Dying” already made a promise that the new songs fulfilled. So, concerning the whole double CD, you get real fine stuff from both bands here. Lovers of the doomy side of Death, who don’t mind well tempered keyboard sounds should take an eye on “Beyond Forgotten Shores”. If you want to do so, check out DORMANT IFERNO at: www.facebook.com/dormantinfernoindia. And for DIONYSUS, visit: www.facebook.com/dionysusband or dionysuspk.bandcamp.com. And be sure to visit the very dedicated label! Order at: www.transcendingobscurity.com or check out transcendingobscurityindia.bandcamp.com