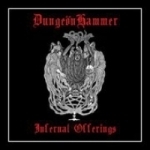 DUNGEÖNHAMMER, whose tracks ‘Primal Blasphemies’ and ‘Infernal Communion’ comprise side A of their split with PURGATÖR, contacted me out of the blue to review this, their second split and second release on Bestial Invasion Records, and boy am I sure glad they did! Their biography sheet proudly lists influences such as CELTIC FROST, BATHORY, MOTÖRHEAD and DISCHARGE. Over the last two years since their formation, these classic influences (main staples in many, many great bands) have reigned over these young lads with an iron fist (sorry, Lemmy, couldn’t resist) making them stronger. As this slab of wax rotates on my turntable for the second time, I find it increasingly hard to not mention DARKTHRONE as a key component for DUNGEÖNHAMMER’s sound. However, I think their resemblance to latter-day, punky DARKTHRONE only incidental, considering that their chief influences are also DARKTHRONE’s. It’s inevitable they would sound alike. PURGATOR, who take up side B, remind me of bands such as INEPSY, CHILDREN OF TECHNOLOGY, and DIE HARD – all of whom stand together as bands that, had they existed twenty years earlier, would be living legends today. PURGATÖR’s first song, ‘Graveyard Noise’ conveys an 80s vibe: epic introductory twin guitars, and D-Beat insanity. Tapping into the past is no easy task considering how many dozens of young upstart bands have tried, and failed, to do what PURGATÖR (and DUNGEÖNHAMMER for that matter) accomplish here. Roaring in after ‘Graveyard Noise’, ‘Infernal Communion’, like its brother song before it, also communicates the spirit of the 80s but through a rougher, dirtier variation somewhat like NME. ‘Graveyard Noise’ sounds rather cheery by comparison, like a drinking song before a headbanging song. If I had to level one criticism at this split, the mix could be louder, but that’s just being nitpicky. Everyone should pick this up and support these bands live! But don’t wait! Only 500 copies are being made. Additionally, you can download DUNGEÖNHAMMER tracks for free on their bandcamp site www.dungeonhammer.bandcamp.com. More info at www.facebook.com/dungeonhammer, www.myspace.com/purgator, www.bestialinvasionrecords.com