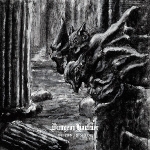 DUNGEÖNHAMMER formed back in 2009 and they are one of those unique acts which consist of members from parts apart. The band is a two piece consisting of Frenchman Elio Cogo on guitars and vocals and Dutchman Rene Aquarius, who takes care of the drumming. In the beginning, they released two split and 7″ singles on Bestial Invasion Records. After that they went back into the void and now resurfaced with might to unleash their debut album, “Infernal Moon” which was released in co-operation with prestigious Pulverised Records and Me Saco Un Ojo Records (LP). “Infernal Moon” was recorded, mixed and mastered by Marlon Wolterink at White Noise Studio and this record reeks the primitive and gnarly spirit of the old conjured by early warriors of death, HELLHAMMER / CELTIC FROST and also the post millennium essence of DARKTHRONE. Revisiting and rendition of the spirit and energy from the classic past can easily thrown into the common stigma of – it’s done before, so let it be rest in peace. However, DUNGEÖNHAMMER is in blood oath with the glorious past and with “Infernal Moon” they envisioned their own take on Black Metal which is simple, primitive and passionate to the depth and delivers a filthy yet spellbinding aura. And, without any doubt such transformation of proto Black / Thrash with its primal filthiness will make your head and neck respond to it, from the beginning to its too-soon end. The solid and warm yet very analogue sounding production gave the perfect medium to express the encrusted and blackish Punk / Thrash of DUNGEÖNHAMMER with a focus on swampy mid paced riffs and gruff vocals. From the enchanting opening track ‘Infernal Moon’, to crawling numbers like ‘Stigma Diabloli’ and ‘Ad Infinitum’ and ‘Empire De La Mort’, there’s that instantly recognizable gait and lurch originated from the tradition envisioned and established by visionary Tom G. Warrior. DUNGEÖNHAMMER is not one dimensional at all and show their fantastic diversity in each number of “Infernal Moon”. ‘Perpetual Funeral Winds’ is a great example of this, moving on from its menacing, acoustic-led intro to a mid-tempo Metalpunk stomp and ends with a slow, spooky, hypnotic guitar instrumental. And the album ending, ‘Ad Infinitum’ (the longest song on the album at more than 7 minutes), is a mind bending creation, as its slow and wicked tempo and transitions evoke atmosphere of infernal horror which is dismal and malignant to the point of ghastliness, with an unsettling solo that ooze malady, and effortlessly transitions into an acoustic ending. This track speaks for itself while thinking about songwriting strength with vision and imagination. The cover art by Timo Ketola (WATAIN, DEATHSPELL OMEGA, ANATAEUS and KRYPTS) vividly encapsulate the essence of this record. As a debut album, “Infernal Moon” is a spirited and admirable effort by DUNGEÖNHAMMER, where past spirit is evoked with creativity and will provide pleasure and inspiration to those who seek. Explore more about the band at www.facebook.com/dungeonhammer or visit their label page: www.pulverised.net