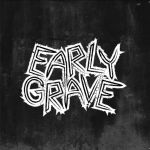 Finnish Death Metal duo EARLY GRAVE has just released their self-titled debut album on Hellstone Records. I had a hard time trying to find any information on this band as it seems the only info I could find was located on Hellstone’s website (and even then it was a small paragraph). The band formed in 2020 and quickly began writing material and were signed to Hellstone. Let’s dive into this album and see what they have to offer. From the start you can see that the production on the album is not well balanced, you can hear more of the vocals than you can of the drums. The guitar work seems good, with some catchy riffs and interesting solos, while the vocals dance between guttural, harsh, raspy and clean (think the clean vocals that Chris Barnes tries to pull off on “The Bleeding”). The band plays an old school style of Death Metal with mid paced tempos that at times jump to fast paced only to go back to mid pace. The album starts off with the instrumental jam ‘Scoundrel’s Return’ which is interesting and laid back but it seems it is missing something, but I can’t quite put my finger on what is missing. ‘Dead Before The Dawn’ and ‘Witchery’ showcase what the band brings to the table. Both are decent tracks that I enjoyed and had some memorable moments. ‘Unholy War’ was one of the tracks that piqued my interest. The song is fast paced, a lot of angry emotion, and a really cool guitar solo that makes it stand out from the rest of the album. ‘Sluts Of Hell’ and ‘Deadly Virus’ also fall in the same vein. ‘Roaches’ stands out from the pack as it has more of a D.R.I. – esque vibe that departs from the rest of the album. Bottom line, it’s a decent debut album, but honestly nothing major to write home about. The band does have some good riffs and songs, but I think they just need some re-tooling to make them better (it also would help to get a better production). The album itself runs just over 35 minutes which is not bad for having 11 songs on the album. Fans of post “Warpath” era SIX FEET UNDER will really enjoy this as it falls in the same league. Feel free to take a gander at these guys, info down below. For more info: www.hellstonerecords.com/earlygrave