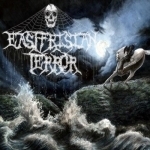 You thought you’ve heard it all? Better think again! Because this one is unlike anything you ever heard. At least concerning the language used here. Germany’s EASTFRISIAN TERROR from Emden sing in their native language, a dialect called Eastfrisian Plattdeutsch, which is only spoken in a little area in the northwest of Germany, situated in the ultimate near of the Netherlands. Formed in November 2012 by former or still active members of, among others, VOMITING CORPSES, LEFT HAND PATH or ANASARCA, they started to play a mix of Death Metal and Grindcore with vocals in their local dialect. Now they recorded their first self financed EP and unleashed it upon us. Due to the extreme vocals in Grindcore style (including some ‘pig-squealing’ noises as well) it is obviously hard to understand the lyrics. But the music is pretty fine Grind Death for sure, meeting international standards. The opener and title track ‘Lever Dood As Slav’ ("Rather Dead Than A Slave") even surprises with an acoustic break and a slow paced Thrash intermezzo. The other two songs, the band anthem ‘Eastfrisian Terror’ and ‘Eala Frya Fresena’ point the musical and lyrical direction as well. The title of the latter is the Eastfrisian slogan, in English, it means "Get up, free Frisians". But both intro and outro show that these guys don’t take themselves too serious in their love for their home area, for they are samples from funny movies, making a pun on Eastfrisian people. If you want to check these guys out, go to www.facebook.com/eastfrisianterror or www.reverbnation.com/eastfrisianterror