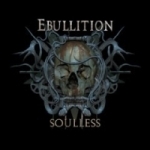 When I got in touch with guitarist Ed Hildebrandt, I thought EBULLITION is a new band that tries to make a name in the scene, but to my biggest surprise, this four piece already exists for 20 years. EBULLITION released a four track demo in 1992, that was reviewed in Blood-Shed ‘zine # 4. Nothing much was heard about them until for two years ago, when the band was reformed in the fall of 2008 in Ocala, Florida. To say the truth, they don’t have the chance of a breakthrough, since they don’t / couldn’t get to first base besides the likes of MORBID ANGEL, OBITUARY, ATHEIST, MASSACRE etc. After testing a series of musicians who just weren’t brutal enough, the band finally found a guitar player in Ed "Hildy" Hildebrandt. Hailing from Tampa, Florida, Hildy is from the home of Death Metal and proved to be just the ingredient for this brutality pie. The group was completed by the addition of Ocala native Seth Schneider; a brutal vocalist who’s sound rivals that of a young George "Corpsegrinder" Fisher. Schneider’s vocals added a darkness to EBULLITION’s sound that could only be created in Florida. Everything sounds very nice, but I didn’t find the group’s effort so attractive and unforgettable. If I hear Florida Death Metal, it’s like as if I hear beefsteak a la Rossini – it can’t be wrong. I confess, the record is a disappointment for me, especially for what is known as Florida Death Metal. The songs are all the time midpaced, they are one dimensional, there’s no blastbeats or variety. Here and there are some melodies (‘Soulless’), we can hear a BOLT THROWER touch (‘Number 8 (Annihilation)’), and only in the title ‘Slaughtered And Disposed’ are a few fast parts. Furthermore the rhythm change in the opening track ‘Vaporized’ is absolutely redundant, it doesn’t fit to the tune. Besides the Florida scene the early ’90s the British one had an influence on them too. The vocal delivery of Seth Schneider is the typical Death Metal growl with a little touch of Black Metal, and in my humble opinion not reminiscent of Corpsegrinder’s. I don’t deny, I expected more from this record, since the band is hailing from Florida, which is known for brutal, technical Death Metal. Unfortunately, this isn’t the case. An average achievement, nothing more. For more info check out www.myspace.com/ebullitionofficial