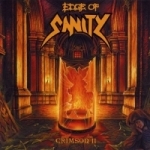 The most surprising aspect of “Crimson II” has to be the lyrics. Though, not the lyrics in themselves but the fact that Clive Nolan from ARENA wrote those. Oh well, the lyrics can be whatsoever if the music doesn’t work. Judging from Dan Swanö’s Edge Of Sanity I really have to read the lyrics because this album is definitely one of the best Death Metal albums ever made and it’s surely Dan’s finest moment. Progressive parts, a lot of variation and the sheer brutality you know from earlier albums done by the band Edge Of Sanity. Personally I do prefer pure Death Metal if I ever had to choose, but when I get something great from both worlds I have to smile and listen over and over again. Brutal vocals and great musicianship contribute to the impressiveness of “Crimson II”. However, where Dan Swanö really succeeds this time is in the wholeness of the album. Several sections repeat throughout the album and make it more of a journey than 10 songs put together into an album. And dare I say that especially one part towards the end of the album, after 37 minutes, makes the whole worthwhile. In addition you get supreme Death Metal all over. But still there’s something that makes this less worth than it actually could be. The problem with “Crimson II” is that the album is very progressive. Then, when you get the average Death Metal parts here and there (read: traditional Edge Of Sanity / Dan Swanö riffs) you get a bit bored. And, for being a Death Metal album a couple of the neo-progressive parts are too nice. Still, and as said already, “Crimson II” is one of the best Death Metal albums ever made and I will surely listen to it over and over again.