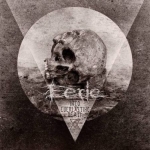 During the first listening session of this debut by EERIE from Poland I was a little bit doubting. Doubting if there is a need of another Black Metal outfit with a rather traditional and oft quoted approach. But every day this album grew stronger and stronger. Although there are just four songs with a running time just over 30 minutes "Into Everlasting Death" has all the necessary elements to convince the mindful listener. An overall sinister, dark and eerie (the band’s name fits perfectly) atmosphere with songs full of suspense, both fast and more mid-tempo paced with varied vocals. Especially those mid-tempo parts are quite awesome, hitting you in the stomach and pounding heavy as hell. Some guitar riffs / melodies are in the vein of Swedish Black Metal, bands like DISSECTION or early KATATONIA may serve as illustration for the melancholic but at the same time vigorous emotions evoked by EERIE. What surprises me the most is the aplomb and assuredness of the band. There is simply no idle running, every riff, rhythm change and blast beat is absolutely fitting. No weakness, it seems the band is practicing both on playing and songwriting a lot. Even though the musicians are not new to the scene and already gained experience in bands like FORMOSUS, OUTRE, BLAZE OF PERDITION such an album like "Into Everlasting Death" is not a foregone conclusion. Some band may have used all the riffs and ideas for two or three full-lengths, but not EERIE. So, now I am going to stop praising the album to the skies. Last awesome and fascinating detail about this album: the samples used as intro / outro are taken from the HBO crime series "True Detective". www.facebook.com/eeriebm, www.arachnophobia.pl