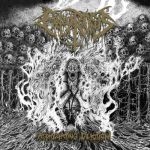 “Asphyxiating Devotion”, released by the Spanish label Memento Mori, is the debut full-length by EKPYROSIS, an interesting Italian underground old school Death Metal entity created in 2013 by four maniacs who provide here a really impressive dose of rotting brutality distributed in 9 tracks. ‘Profound Death’, the first one, is the longest track here and it begins with a cool intro to then give way to what you are expecting: sheer brutality expressed in an ensemble of blast beats, double kicks, brutal vocals and heavy well-worked simple guitars, incorporating some awesome passages of pure fast brutality and slow parts. In fact, sometimes they sound as a Doom / Death Metal band. ‘God Grotesque’, the third track, is one of my favorites here because of its awesome variations: it starts with a slow simple bass solo to then drive to chaotic and fast sounds with some really catchy riffs to go back at the end to slower passages. ‘Immolate The Denied’, the following track, is a fast monster of Death Metal with a nice 30 seconds instrumental introduction and a couple of brutal growls. ‘Morticians Of God’ and ‘Depths Of Tribulation’, the sixth and seventh track, are two memorable tracks too (in my opinion here is not a bad track at all!). The band works very well intercalating some fast parts to then move to faster passages, controlling in a good way the characteristic intensity of a genre like Death Metal, a source that is every time present on this record. Here is a good balance between the structure of the compositions, intensity use, and brutality. This is just simple brutal music well done. The good production on this release is another remarkable point here, although I really miss more presence on the bass guitar. With a couple of demos and one EP released 2 years ago, with “Asphyxiating Devotion” EKPYROSIS is rapidly becoming one of the revelations of the present year. If you love INCANTATION, SINISTER, IMMOLATION, FUNEBRARUM, DEMONIC RAGE, FATHER BEFOULED, etc. this one must be in your collection! Follow EKPYROSIS here www.facebook.com/ekpyrosisband, www.memento-mori.es