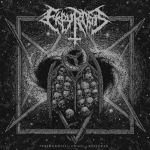 Italian horde EKPYROSIS were creative again and one year after their first full-length "Asphyxiating Devotion" they continued writing songs and four of them get unleashed now in form of their new EP "Primordial Chaos Restored". Heavily influenced by IMMOLATION and also INCANTATION the guys start with the opener ‘Abyssal Convergence’ which is slow-paced nearly doomy Death Metal at its finest with a pretty gloomy and menacing atmosphere before increasing the speed and crushing some skulls.’Instigation Of Entropy’, the second track, is another fine old school Death Metal gem. Again they start pretty slow and doomy before they increase the speed and level of brutality.’Conception From Nothingness’ and ‘Chaos Condensing’ are pretty similar structured and convince the listener with classic Death Metal. The guitars are very brutal and thick while the grunts are even deeper and very rough. The production is clear and very powerful and the drumming is very intense and rounds off this brutal EP which was also granted a very good artwork. The guys close this new output with a cover of INCANTATIONs ‘Devoured Death’ which is solid and seems to be their bow in direction of the US masters, but for me most covers are superfluous anyway. If you are looking for some old school stuff again, check the band via the following sources: www.facebook.com/ekpyrosisband, www.tfhrecords.com